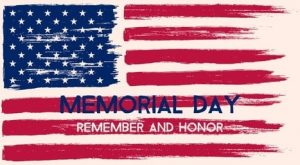 This weekend, our family followed our Nation’s custom of decorating the graves of family members who gave their lives while fighting for our country during their service in the military.  The decoration of the graves included not only family members who died in battle but also those who, during their lives, served in the military.  In the cemetery where our loved ones are buried, I noted hundreds of graves which had an American flag planted next to the grave’s tombstone.   The Cemetary’s electronic chime system alternated tunes including patriotic songs.

The American tradition of decorating the graves of fallen American soldiers began shortly after the close of the Civil War in the Spring of 1865.  With the war’s end, citizens across the country began to decorate the graves of soliders who gave their lives defending the Union in the Civil War.   The decoration of the graves consisted of placing flags and flowers on their graves.

With the advent of the first World War, the nascent national tradition of remembrance extended to those soliders who died in the World War I.  Remembrance was later expanded to included soliders who made the ultimate sacrifice in all of our Nation’s wars and conflicts including, Word War II, the Koren War, Vietnam, Iraq, and Afghanistan.

This tradition encouraged other Memorial Day customs, including, local parades with military themes, the wearing of poppies (inspired by the poem “In Flanders Field” composed by Canadian Lt. Colonel John McCrae in 1918 after observing red poppies growing among the graves of soldiers) and a “moment of remembrance” every Memorial Day at 3:00 pm.

In 1968, Congress codified Memorial Day as a federal holiday (each year on the last Monday in May).  Because today is a federal holiday, all Social Security offices and hearing offices are closed.  Those offices will reopen on Tuesday morning.