This federal holiday recognizes the legacy of Dr. King and the contributions he made to the advancement of civil rights (outlawing racial discrimination) in the United States. Dr. King devoted his life to the cause of civil rights until his life ended by an assassin’s bullet on April 4, 1968.  A day earlier, on April 3, 1968, Dr. King had flown to Memphis, Tennessee to speak at a rally to support of the Memphis garbage workers strike.  He was 39 years old when he was murdered.  On April 11, 1968, only a few days after Dr. King’s death, the U.S. Congress enacted the Civil Rights Act of 1968.  The Civil Rights Act of 1968 is a broad law which includes protection for persons of color and protection for Native Americans.  The Act also outlaws discrimination in housing (The Fair Housing Act).  In 1988 Congress expanded the Civil Rights Act to protect, among other people, people with disabilities.

Ironically, the passage of the Civil Rights Act of 1968 occured at the same time riots were taking place because of Dr. King’s murder.  It is ironic because Dr. King was a proponent of non-violence.  In fact, Dr. King was awarded the Nobel Peace Prize in 1964 in recognition of his commitment to social change through non-violence.  On the evening of Dr. King’s death, Senator Robert F. Kennedy was in Indianapolis campaigning in support to his own bid to become the Democratic nominee for the President of the United States.  When he learned of Dr. King’s death, Senator Kennedy went ahead with his already planned speech to a gathering in the heart of downtown Indianapolis  (even though he was advised not to give a speech because of the outbreak of riots in other cities).  After Kennedy’s improvised speech, there were no riots in Indianapolis. 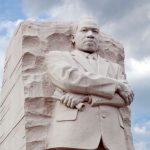 Indiana played another role in the aftermath of Dr. King’s death.  Katie Hall, a U.S. Congresswoman from Gary, Indiana introduced legislation in Congress which eventually led to the passage of the federal holiday to observe the Birthday of Martin Luther King, Jr.  President Ronald Reagan signed the holiday into law on November 3, 1983.  The following year a law was enacted which created a commission to help in the observance of the holiday for Dr. King.  This commission eventually lead to the creation of Martin Luther King, Jr. Service Day.  The service day is now used to encourage volunteerism.  For example, many attorneys and bar groups use this day to answer legal questions without cost.  The theme is to use this day to make a difference.

The notion of a service day for our nation is not limited to Dr. King’s birthday.  There is another day of service in our country, September 11 National Day of Service (9/11 Day).

Interestingly, a day honoring Dr. King is not confined to the United States.  Dr. King is remembered and honored in Canada , Israel, Japan and the Netherlands.