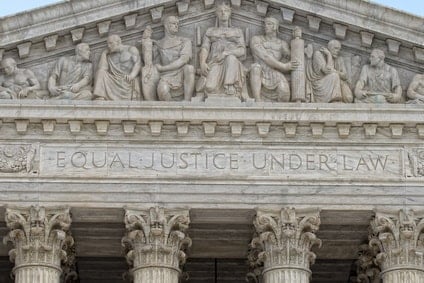 The U. S Supreme Court back in April 2016 approved three changes to the Federal Rules of Civil Procedure.  These approved changes are effective December 1, 2016.  The changes are to rule 4 (which deals with the time within which a summons needs to be issued); rule 6 (which deals with counting response time for a due date of a pleading); and rule 82 (which removes reference to a statute which has been repealed).

Rule 4 adds service upon a corporation, partnership, or other unincorporated association which must be served somewhere outside any judicial district of the U.S. to the rule which allows an extension of the 90 day service requirement after the complaint has been filed.  Rule 4(m) requires that a defendants must be served within 90 days from the filing of a complaint.  If the defendant has not been served within the 90 day period of time, then the court, on its own motion or after a motion has been made by the defendant, must dismiss the case.  (Note: if the case is dismiss, the dismissal is without prejudice, meaning that the plaintiff may refile the case.  However, if the case has been dismissed and the statute of limitations has expired before a new case can be filed, the plaintiff will not be able to again bring the action.)

The Supreme Court believed that there was an ambiguity in rule 4(m) because only service on individuals and foreign governments were expressly included in the list of possible defendants for whom a plaintiff could obtain an extension of the 90 day service time (assuming that those defendants had to be served outside of the United States judicial districts).  Now, with the specific addition of the entities: corporations, partnerships or other unincorporated associations, any ambiguity is removed from the list of possible defendants for whom an extension of time may be obtained if service on those entities needs to be made outside any judicial district of the U.S.

Rule 6 removes the automatic 3-day extension to the time periodwithin which a party may or must act after having been served if the party has been served by electronic means.  Under rule 5, a party in a litigation may be served by a number of different ways or methods: handing the paper to the party; leaving the paper at the party’s office with the person in charge; at the “usual place of abode” of the party with a person of suitable age and discretion who lives there; by mailing it to the last known address of the party; leaving it with the clerk of the court (if that party had no known address); sending it by electronic means or by delivering it by any other means that has been consented to by the party.